Terry cloth is a fabric with loops that can absorb large amounts of water. It can be

manufactured in two different ways: by weaving or knitting. Terry cloth is woven on special looms that have two beams of longitudinal warp through which the filler or weft is fired laterally.The first industrial production of terry cloth towels was by the English manufacturer Christy.

There are two types of terry fabrics: 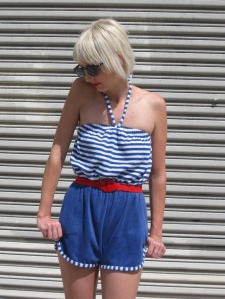 Towel Terry is a woven fabric with long loops that can absorb large amounts of water. Its content is usually 100% cotton, but may sometimes contain polyester.

French Terry is a fabric, used in men’s, women’s and children’s clothes. One of its sides is flat, while the other side has cross loops. It is either 100% cotton or contains polyester or elastine like lycra. It is often warp knitted, and the term French Terry is colloquially used for all warp knitted Terry.
It is the length of loops that determines how much fluid is absorbed by the cloth as longer loops provide more surface area to absorb and come in contact with the fluid.

Items that may be made from terry cloth include babies’ diapers, towels, bathrobes, bedlinen, and sweatbands for the wrist or head. Terrycloth is also sometimes used to make sweat jackets. Terry towelling hats with a shallow brim were once popular with cricketers (like English wicketkeeper Jack Russell) but are no longer in fashion.